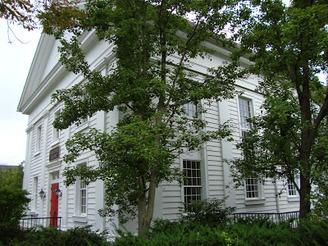 2017 marked our 175th anniversary. The history of Christ Church is essentially an account of the dedication, service, generosity and faith of its parishioners.  The Episcopalians who came to Hudson as early settlers had been meeting in temporary quarters. It was not until July 11, 1842, under the leadership of Anson Brewster, that they organized the parish of Christ Church and, four years later, voted to build a church.

Anson Brewster secured the property and oversaw the building of the first church at a total cost of $3,200. Dedicated on September 25, 1846, it was a stately Gothic structure with a tall steeple. Mr. Brewster installed the bell which still rings in our chapel’s steeple today. Christ Church was named for his home parish in Hartford, Connecticut.

The new parish grew over time, and the 20th century brought the need for a new church building. In 1928, vestry voted to raze the original building and, at a cost of $60,000, erect a new church on the same site. The cornerstone was laid in 1930 for this fine example of Greek Revival architecture, and it was consecrated in 1934. The bell, pews and baptismal font of the original church were installed in the new building, and the base of the altar was built of walnut wood taken from the first structure. In 1957, the interior of the church was refurbished, and a multipurpose parish hall and kitchen were added.

Another part of Christ Church reflects the influence of Anson Brewster. In 1848, he bought the 1834 Greek Revival house east of the church and, in 1856, sold it to his daughter, Ellen Brewster Beebe. The family retained the title until the property was sold to Christ Church in 1945. It was used as a rectory until 1956 when the Pritchett family moved to a rectory on  it. Currently it houses staff offices.

In the 1960s, vestry purchased property east of the Beebe house to provide for further expansion. In less than 30 years, the need for a larger church building became crucial, and, once again, members of the parish agreed to assume the responsibility of building a new church. Ground was broken for the building on January 19, 1992, nearly 150 years after the parish was organized. This church was dedicated and consecrated on January 18, 1995. It is in the New England style with colors and fabrics inspired by St. Anne’s Church in Rhode Island. The stately and elegant Noack organ was dedicated on May 31, 1998, and has become a source of great inspiration and beauty during worship. The 1934 church, now our chapel, is still in use for services for ourselves and for the First Presbyterian Church of Hudson which shares our space.

From the original group of 37 pioneers, the parish has grown to a large congregation of members who “Cherish Christ, our community, service to others, and worship – all rooted in the rich ground of Episcopal faith.” We look forward to many more years of loving God and our neighbor, strengthened in faith and supported by our church family, in this Episcopal parish of Christ Church, Hudson.